Blaseball’s comfortable absurdity returned in full force on the first day of the new season.

Pudge Nakomoto steps up to their first at-bat, bottom of the first against the San Francisco Lovers.  Season Twelve; the Era of Discipline has passed, and a new Era has dawned—Blaseball is under new management, Concessions have been distributed, and a fifth Parker MacMillan sits in his office under the careful eye of The Boss.  Fans everywhere are staring at computer screens, scrutinizing this new ILB, and then—
https://twitter.com/AReblase/status/1366418583388106756?s=20

Nakomoto is not supposed to be hitting dingers straight out of the dugout.  At one and a half stars pretty much across the board, Pudge is meant to be middling, a player you groan at when they step up to plate, but cheer for deep in your heart for that beautiful underdog win. But then again, maybe there isn’t meant to be a second Sun existing next to a Black Hole and Solar Eclipse, and maybe our teams shouldn’t have to be dodging shattered shells of peanuts on their way to the next blase.

But then again, maybe that’s how it is meant to be, maybe that is how it should be.

It’s the Yellowstone Magic against the Canada Moist Talkers, ranked #17 and #2 respectively, and folks are expecting a quick and easy shutout with PolkaDot at the mound.  The Talkers take an early lead in the first, with veteran Eugenia Garbage leading the charge, but Yeong-Ho Garcia keeps it tight ‘til the bottom of the second.  The Magic take the plate.

Diehard Fans may remember Chorby’s acquisition of the 0 No Blood type during the Season 10 Elections, along with the rest of the Yellowstone Magic.  In short: “Players with 0 No cannot be struck out when there are 0 Balls in the Count.”  And if my idol payouts are any indication, Patterson loves to strike folks out.  A combination of Short’s 1-star batting skill—also known as frantically waving a blaseball bat in front of a plate—with PolkaDot’s complete inability to throw a pitch outside the strike zone, led to one foul ball.  Then another.  Then a third, a fourth, a fifth, a 10th, a 20th, a 50th, racking up to one hundred and twelve (112) 0-2 Foul Balls in a row over the course of 9 minutes and fifteen harrowing seconds. 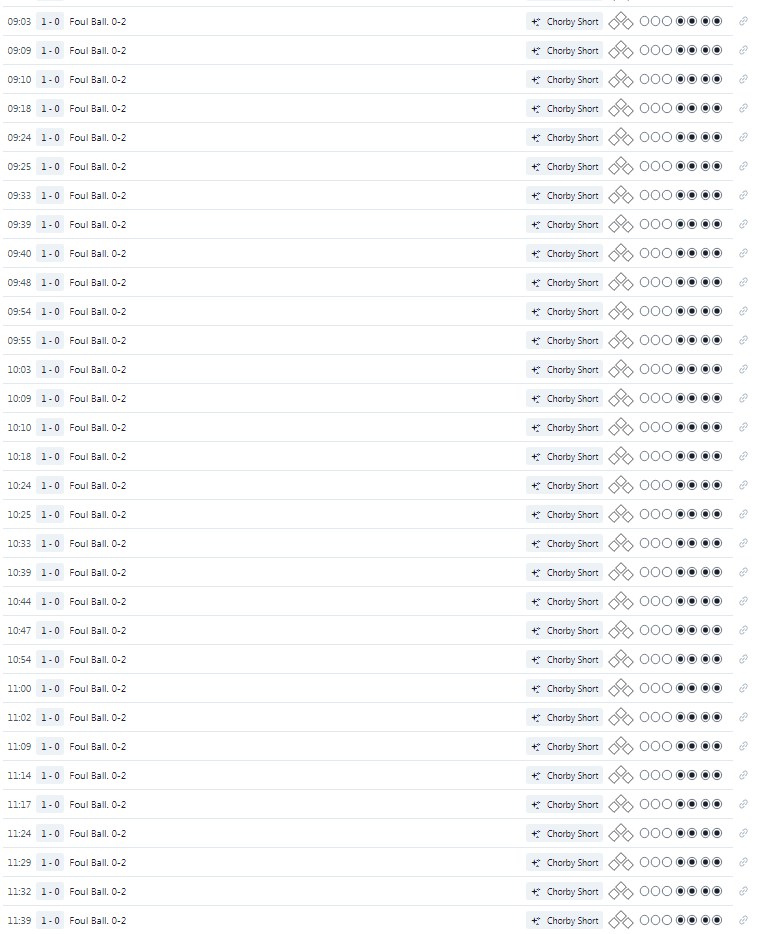 A vicious inning for sure, until Patterson decided to chuck one at the ground in front of Short, giving them a Ball in the Count, and then summarily striking them out.

Blaseball’s always been comfortable in the wacky, the wild, and the mysterious.  Its in this absurdity where it thrives—a kind of safe place for us to feel like we can be in disbelief again.  After facing the Peanut down in previous seasons, it can truly feel as though our world is programmed to beat us down and exhaust us, and even with the new “sustainable” schedules, we’re all gonna have to look away from the games eventually.  In this chaotic space, we finally have a chance to feel like we can engage, emotionally, physically, mentally, in a splort that we love, with players that we care for, with teams we would die for.  Amidst all the absurdity, Blaseball still feels like home.

The Tallahassee Fishblades: An Expose

Blaseball is Returning. Here’s Six Things We Can Expect.

2 thoughts on “Welcome Back, Blaseball: Chorby Short Hits 198 Foul Balls In One Game”

The Hellmouth Sunbeams Season 2: A Retrospective

The Tallahassee Fishblades: An Expose