Famous Owens is a player who changes face every game, delighting in whatever performance they feel like bequeathing the Hades Tigers. From pitcher to batter, from barely lored to the most beloved original Tiger, with multiple songs and their own dedicated swearing corner— Famous Owens has established themselves as one of the most fascinating players of the Hades Tigers.

From the beginning of the Discipline Era through most of Expansion Era, Tigers Hiroto Wilcox and Dunlap Figueroa held down the greatest lineups in their peak and continued to be some of the greatest workhorses— amongst their many accolades, both top the career hits, innings and games played leaderboards just by virtue of playing the most Blaseball.

Strutting in behind them is Famous Owens. They began their career on even footing with the duo, but when Ruthlessness violently took over the League, Famous decided to flummox the Stripes at every turn instead. When we expect them to flounder, they decide to shine. They pitch nail-biters before dramatically throwing the game, a diva sick of the spotlight. They’ll pitch more shutouts than the Hiroto and Dunlap for fun and then completely blow up the next season. No parties, no bites, no peanuts, just absolute chaos on the mound.

It’s no wonder that Famous was rarely popular, not when put alongside stars like Hiroto Wilcox and Dunlap Figueroa. After all, the Tigers love their numbers and pride themselves on their pitching— Season 12 being the shining example. In Season 12, Hiroto boasted a 1.33 ERA, 3rd of the season, while Dunlap came home with 2.16 ERA, 6th. Famous trails behind— a workable but unspectacular 4.68 ERA. And yet, with 3 games each in the postseason, Hiroto gives up 6 runs. Dunlap, a miserable 13.

Owens only allows a single run, one of the best performances in their life. 1 walk, 1 run, 7 hits, a WHIP of 0.444. Despite our love for nitpicking numbers, our dedication to following our pitchers’ accolades— for a year, no one catches the one achievement that we thought had always eluded us.

In the deciding game between the Tigerbeams for Wild League Champion, Famous quietly pitches a perfect game. The only perfect game in Tigers history, something not even Dunlap and Hiroto in their most dominant seasons have accomplished. Like a jester, this feat is met with a few puzzled “Was that a shutout?” as the Tigerbeams quickly usher themselves into the center stage, no time to celebrate as we face the nail-biting finals. After all, no one expects anything from the little clown.

And after that, let’s be honest, the Tigers struggle. No parties and an understarred roster became a weakness. And Famous Owens, who has always played second fiddle, is quietly shadowed with hopes of a future batting career before the Tigers face an absolutely soul crushing collapse. Seasons of dominance and inertia come to a head. Their already declining but competent and beloved duo will be alternated into oblivion. The dependable hearts of their lineups will be vaulted, traded away, alternated, consumed and shadow jailed in quick order. The era of Tiger dominance will, undoubtedly, be over. But… not quite yet.

Even with Paula Turnip ripped to shreds, Aldon Cashmoney vaulted and Hiroto Wilcox alted into a new low, we still had an Underhanded, 0.33 ERA Dunlap Figueroa pitching for a Magnified 196 WRC+ Dudley Mueller. The Hades Tigers had everything needed to go not with a whimper, but a bang, a circus ready to put on its final, desperate show.

this would be awesome if it was our season 12 championship run. it’s season 21. we’re screwed.

In Season 21, the Hades Tigers put up the most joker finals run, the deep postseason run that Stripes have long dreamed but given up on. Just like our most dazzling peaks, we somehow end up in the finals with one of our oldest rivals, the only team with as many rings as us, the Baltimore Crabs, with a team of Magnified Dudley, Underhanded Dunlap, and a miserable sack of rocks. With one of the worst lineups in the league and finally giving in to a Voicemail machine, we whisper amongst ourselves. Will we have time to infuse Famous’ batting? Could we actually pull this off?

And in the end, Famous Owens, with all our hopes and dreams, debuts and… strikes out. Mummy and Hiroto falter. The Crabs hold down Magnified Dudley. The dream is finally dead.

Yet as the dust settles and we resign ourselves with a new low as Dunlap is alternated to hell and Dudley leaves for a subtractor dog, Famous Owens breaks our streak of bad will luck and lands the perfect batting infuse. Just as our bats and pitchers— no, our favorites, our beloveds and the reasons why we keep rooting for this team are locked away or become shadows of what they once were, the one player we never relied on starts to blossom. 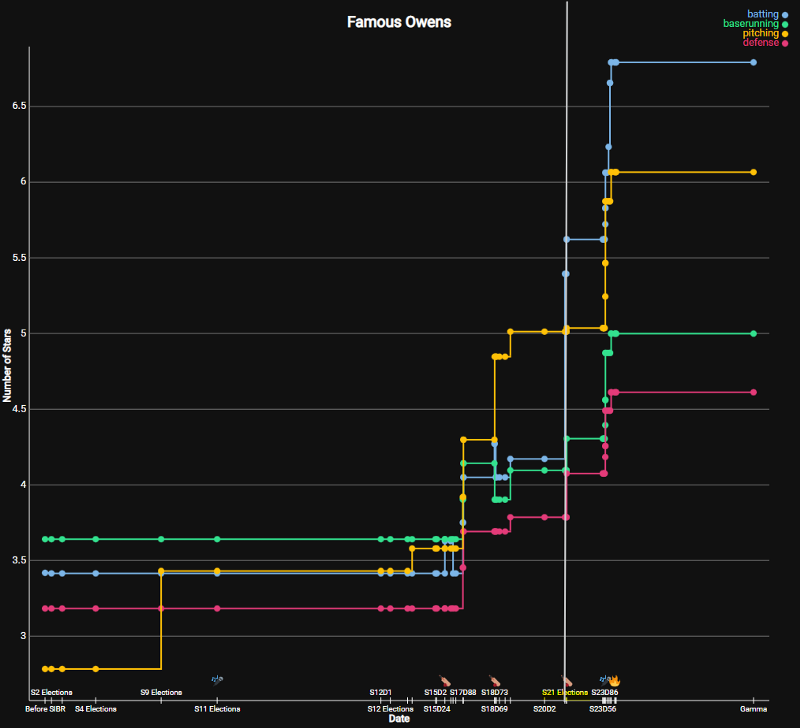 They infuse, they party like it’s the end of the world, they drink batting blood, they even Theseus the Tigers just to commit LCD Soundsystem fraud, all to emerge as a dominant slugger, the new heart of a Tigers roster driven by a fragile but killer ball game. They’re hope. That even as old beloveds leave us, frustrations mount, and fellow fans leave— there will always be a next era and there will always be someone new to root for.

So maybe they’re not the star of the old era of Tigers dominance. But they’re part of our long history, and they forge an enduring connection between the old and the new, dragging the Tigers into a new era and one day, maybe back on that finals stage that Famous has always shined on.

Why? Because that’s Famous, darling, what else do you expect? ✨

Mera is a tarot card amateur, STATA forgetter and a 7101 TR tetr.io player. She supports the Hades Tigers and the Atlantis Georgias, two cities realer than her actual home according to TGB. You can contact her at @miasmajesties or by pinging Tetris Talents.

SHARK OUT 2 – The Shallow End

SHARK OUT 2 – The Shallow End

Across Eras: the Career of Perennial Tiger, Famous Owens