Francisca Sasquatch is one of the Dale’s greatest batters, and one of the best contact hitters of all time. They pitched for Miami for most of the DE, feedbacked to the Tacos’ rotation, were shelled as part of the Snackrifice there, joined the Pods, and then fell back to the Dale as a batter. Small teams often have a hard time getting their players into the Hall, regardless of how deserving they are – see Summers Preston’s unfortunate snub. If you want to rectify that, vote for Francisca Sasquatch.

Do you like basic stats? Starting S11 and up until almost the very end of Beta, Francisca Sasquatch had a slashline of 0.307/0.334/0.576. In S24, they were one of only six players to ever achieve a seasonal .400 batting average, alongside such names as Dudley Mueller, Jaxon Buckley and Conner Haley. 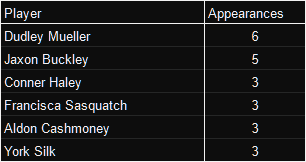 Do you like advanced stats? The Blaseball community has come up with an equivalent to Baseball WAR (called WhAT) and our own versions of OPS+ and wRC+. Refer to the MLB glossary to see the exact definitions, but in short, they’re all various ways to quantify just how valuable a player’s entire offensive contributions are, accounting for the ballpark they play in and ranking them in comparison to the league’s environment. All this to say that, when you consider Fran as a whole, putting their fantastic batting together with their great slugging, and add in necessary context like where she usually played and what the general state of the league was when they played… their numbers are even more impressive. The following stats are all based on a minimum of 2000 PA, the requirement for Hall eligibility.

By WRC+, they’re 24th, above such names as Thomas Dracaena and Baby Triumphant, not very far from Jessica Telephone and Beck Whitney. 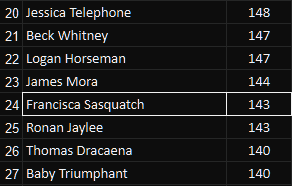 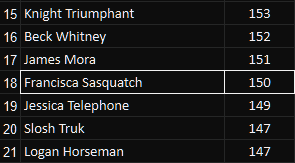 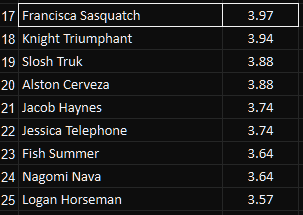 By whatever statistical metric you choose, Francisca Sasquatch is a fantastic contact batter and an exceptional all around player, easily deserving of a Hall Of Fame spot.

This narrative comes from the odd perspective of being a Tacos fan, I am sure someone from the Dale can fill this in way better, but Fran Sasquatch is the player I regret not trying to retrieve most.

On Season 9 Day 1. The monitor appeared on the idol board following Pitching Machine, the highest ranked shelled player. Right. Again. A third idol board campaign in a row which impacts the team in a way we have no information on. Do the tacos have the energy for this? Not really. Is that going to change things? Definitely not.

As a team we decide that the player who should be sacrificed to the squid was Fran. It wasn’t even close. The other 3 pitchers from the snackrifice were loved and OG tacos and then there was the iconic Pitching Machine. Having spent the least amount of time with us, Fran was seen as the most expendable. 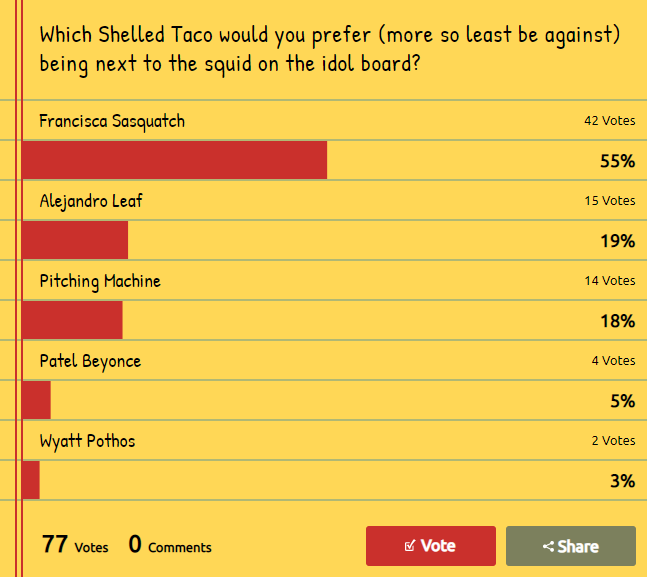 So Brawl in the Hall was formulated. You might have seen these images float around. A full campaign to boost Fran to meet the squid which was abandoned as the Moist Talkers requested an audience with “The Moist One”. The Tacos oblige. Even do up most of the propaganda for it. On Season 9 Day 99 PolkaDot Patterson, the strongest shelled pitcher, was freed. What were the after effects? Almost none. Not superallergic like Sexton Wheerer or Jessica Telephone were. Not Honey Roasted like Peanuts Bong and Halloway or Peanutiel Duffy. Just Squiddish. A mod which meant if the player was incinerated, their replacement would be not a fresh egg, but a player from the hall of flame.

In the aftermath of Season 10 Day X, the Pods fell. Not to their original teams. And not always in their previous positions. But they fell to the positions best suited for them. Then-pitcher Francisca Sasquatch had fallen into lineups away from Los Angeli but back to her original home Miami.

In Season 12, we are given tools to potentially retrieve lost teammates. We don’t use them. But it has been a common thought train in the Taco Stand to wonder “what would have happened if we let PM or Fran go to the squid”. For me personally, it is an exercise in jealousy. Fran was excelling in Miami. Not alone, but along with Logan Horseman, you had potentially the strongest pair of hitters in a lineup in the early expansion era.

I wanted Fran back. The Crabs acquired Logan Horseman and an anecdote about that time is “the Dale would be fine, they still have Sasquatch” and by the numbers…  they were. (Emotionally… possibly less so). I maintain that the Crabs exchanged for the wrong player of the two and this got undone immediately.

There wasn’t much chatter about Fran’s personality during her time on the Tacos. Most of the Tacos’ time was spent making light of how horrible we were and going through idol board campaign season after season. But one thing which came out of these campaigns was again

Brawl in the Hall. Fran. Likes. To. Fight.

And while she may have been robbed of that opportunity in Season 9. A reason to lash out appeared in Season 19.Logan Horseman was incinerated on Day 7. On Day 10 Francisca Sasquatch tasted the infinite and shelled Flattery McKinley (this also lead to superallergy crimes but again…  another tangent for another time).

This is a player who has reacted in sim the way which most would expect. After falling from the Pods, where do you go? You go home. When one of your closest teammates gets burnt before your eyes? You lash out.

I started this story talking about how jealous I was of Fran’s success in Miami and we quantify this success and why I would always have a longing to have Fran Sasquatch at bat in Los Angeli. But an understanding that this career has been the best possible option for her to thrive and acquire your vote for her to be in the Hall.

Brawl to the Hall. The Francisca Sasquatch Case.

ALTERNATES: LOOK BACK (IN VIOLENCE)

ALTERNATES: LOOK BACK (IN VIOLENCE)